A Vacation Trip to Istanbul 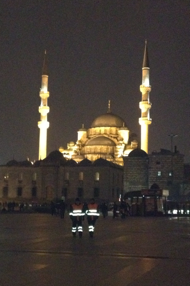 I am an admirer of Steve Sando who grows organic heirloom beans in California, so when he praised a book on Turkish cooking, Turquoise, written by a friend of his, Greg Malouf, I ordered a copy.
This is a coffee table sized book with pretty pictures of food and men. Boys and men. Apparently there are no women in Turkey except for two wrapped in black and huddled in a street doorway. I didn’t like this pretentious book and I barely looked at the mostly meat recipes.
Then there was a travel article in the New York Times and it showed pictures of people, including women, eating and having a great time. In fact the food descriptions were tempting, and we did need vacation plans. Then a customer came into the restaurant and I admired her scarf. She said she had gotten it in Istanbul. She reminded me that we had run into each other in Oaxaca, Mexico, a favorite city for both of us. Perhaps we had the same tastes! She urged us to go to Istanbul.
With some hesitation I talked to our friend Krystyna, a most intrepid researcher, and asked her to look into the possibility of an Istanbul visit. Besides getting the usual guidebooks, she joined Airbnb, to find us an inexpensive place to stay. She also found us an American ex-pat “foodie”, Kathy Hamilton, who could take us to restaurants and the fabled Spice Market. And another American ex-pat fabric designer, Catherine Bayar, who knew weavers, dyers, and felters. Krystyna even worked at learning a little Turkish, a very different language from anything we knew. Best of all, she has a friend from Istanbul whose family wanted us to come to dinner during our stay.
We went in February; off-season for tourists, and it was very cold and very hilly. But even on the first day, (before we met with either guide) as we wandered around, we found:
- People were exceptionally helpful, often taking us where we wanted to go whether they spoke English or not.
- The City is startlingly clean. The cobblestone streets all have drainage ditches lined in stone, and not even a cigarette butt is present.
- There are cats everywhere, and they are as friendly as the people! Obviously because the people feed them and they expect the best from humans.
On later days we reflected that we never saw an obese person. Of course there is a great amount of walking (as well as a very good transportation system).
Most amazing of all, I never saw any sign of public sexual aggression- no eyeing women up and down-no nasty noises or comments….how come?
And we always felt safe walking the several blocks home from where taxis dropped us off, though it was dark and men were about.
…………………………………………………………………………………………………………
I started with a list of 27 restaurants that we might try and actually got to 15. They say you can’t get a bad meal in Istanbul, and we didn’t! We did have favorites though….
Ciya Sofrasi, on the Asian side of the Bosporus (Kadakoy), cooked amazing vegetables like purslane and borage, mallow and dock.
Asitane (Edirnakapi), tries to reproduce Ottoman Empire dishes such as almond soup, dried eggplant with pomegranate molasses and saffron rice pudding.


Van Kahralti Evi (Beyoglu), serves breakfast (all day) of cheese and olives and dips like muhammara (roasted red peppers), sour cherry preserves, honey with walnuts, and beautiful breads with water buffalo butter and clotted cream (kaymak). Most everything is shipped in daily from the Kurdish city of Van, near the Iranian border.
And Akdeniz Hatay Sofrasi (Fatih), where wonderful breads emerged from the oven all night. Hatay is a Turkish province near Syria and the cuisine reflected that. The fresh squeezed pomegranate juice and the sweet olives served as dessert were both memorable, as was the waiter’s and the owner’s generosity and warmth.
Also good was Anatolia (Sultanahmet), where we went the first night, and tasted Raki, along with amazing olives and cheeses, and learned about Turkish politics from the viewpoint of the Kurdish owner/waiter.

We also enjoyed Cooking Alaturka, Develi, and Datli Maya, where one climbed the stairs to the 2nd floor, walked through the kitchen and then a few more steps up to the small dining room overlooking a pocket park. There was a little place in the Spice Market where we drank superb Turkish coffee and ate locum, Turkish delight, and many varieties of baklava. And Bizem Ev in Konkapi, for delicious spinach boreks.
Because we so liked the kaymak at Van, we proceeded to visit three kaymak makers for breakfast. Besiktas Kaymakci has been serving kaymak for over a hundred years. The current owner, Pando Bey is 87 years old. We ate his famous kaymak, a rich thick but delicate cream with honey, eggs, fresh bread and black tea.
We went twice to Ciya Sofrasi, and the second time they gave me a small booklet of commentaries about the chef-owner, Musa Dagdiveren. This quote from him leaped off the page when I saw it:
“I travel all over the country to cook with people in their homes and also study old books to find new leads. I get very excited when I discover new poor people’s dishes, because I believe only poor people can create great food. If a man has money, he can buy anything, but a person who has nothing must create beauty from within.”


Yes! Exactly what I believe.
A highlight of our trip was our visit with Krystyna’s friend Fatma Nalbant’s family. They made a beautiful spread of dishes – the finest thin-rolled grape leaves I’ve tasted, borek, and kisir (a bulgur salad) made with a little tomato paste, red pepper, and shredded cilantro and diced pickle. When I admired it, Azzize, Fatma’s sister immediately repaired to the kitchen to show me how to do it.


We did see Aya Sofia and the Blue Mosque and the ancient Christian Chora Church. We also traveled to a suburb to see the new Sakirin Mosque, designed by Zeynep Fadilhoglu, a woman. It is quite beautiful.

We went to a hamam, a Turkish bath. At last I was warm! It was a wonderful experience. We went to one in our neighborhood rather than an expensive tourist version and it was both comforting and energizing.
When Catherine Bayar arrived on our 2nd to last day in Istanbul, she took us to a small weaving studio where they wove plain weave linen, cotton and silk for elegant classic scarves and shirts.


Then on to Musa Kazim Basaram, expert natural dyer and designer/weaver of modern kilim rugs.  He and I connected, intensely discussing natural dye techniques. He wants to reproduce my mermaid quilt design in a kilim and I am delighted. He later sent us a container of his delicious grape leaves, which we were grateful to have for supper, since we were too exhausted to go out.


Catherine next took us to Ikonium Studio, where American expat Theresa May O’Brien is partnered with Mehmet Girgic, who makes museum quality felt art. She had antique camel saddlebags and newish large kilim rugs. Before I went there I had Turkish liras left over, but afterwards, I needed my debit card to help pay for the gorgeous, woman-made Nuzumla kilim now in my living room.

The apartment we stayed in is called Helen Suites. It is in a quiet, old neighborhood, a few blocks away from the train, which takes you into the center. The area is called Kumkapi, and is considered conservative. Women in headscarves were always walking the narrow streets, but we saw no women in burkas or chadors in our neighborhood. Our space was comfortable, warm in this very cold weather, and very inexpensive. We were glad not to be in a tourist hotel.
The worst part of the trip was coming home to Kennedy Airport. Understaffed, dirty. We stood in line for an hour and a half, and were yelled at by officials who didn’t possess the wherewithal to care for so many of us with only three customs and immigration staff to check baggage and passports for hundreds. Hateful, after the comforts of passing through Istanbul Airport.
Finally, at home, I looked at my cookbooks. There are a few okay recipes in Turquoise, but much better versions in Silvena Rowe’s Purple Citrus and Sweet Perfume. I had acquired Ghillie Basan’s Classic Turkish Cooking in Istanbul and Binnur’s Turkish Cookbook once home. I’m so glad that the Istanbul we saw (and in these cookbooks) isn’t the one in Malouf’s Turquoise! I was able to adapt recipes for sweet potato borek, leek borek and apricot pistachio pilaf from Purple Citrus, making them vegan, and the kesir, muhamarra, and cemen dip from what I learned in Istanbul, and so we served an Istanbul dinner for a few weeks upon our return home. As predicted by many of our customers, we loved the city, its people, and the food. 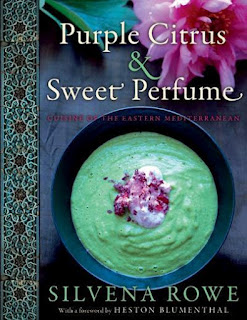