WHAT’S WRONG WITH YOU?

I am constantly annoyed by peoples’ efforts to put me in a labeled noun box.  What is wrong with saying to me or to me and my friends “you”?   It works singular or plural.


Worst is “you guys”.  It has become a popular tic, and people who refer to us this way don’t use it only once, but in every sentence.   Even when we say we are not guys (similar to or almost as good as men),* they still can’t stop the tic, even when they try.


But I don’t like “ladies” as an alternative tic either.  To me, lady has always connoted propriety of upper class with a faint hint of contempt, and I don’t think I have ever been a lady, anyway.  A recent restaurant visit had the waitress incessantly asking: “Ladies, another drink?  How is everything, ladies?”


We are women.  We often tell the speaker that - and if they find that word impossible or terrifying to use (and many do), they could just leave off the noun and say "you".


*we don’t appreciate the comparison, especially since so many male bad behaviors are dismissed as “a guy thing”
Posted by selma miriam at 5:45 AM 9 comments:

A Food Vacation in Chicago.

I love going to restaurants, especially ethnic, to taste what other cooks do with vegetables and grains. If they don’t feature several vegetarian dishes, I don’t go there.
I especially like to check out the cuisines that I am less familiar with – like all the Asian possibilities: Thai, Chinese, Vietnamese, Japanese or Indian.   There always seems to be something vegetarian or which can be made vegetarian.  Of course another mother lode of vegetarian treats occurs in the Mid-East, with similar but distinctly different cuisines from Greece, Syria, Iraq, Iran and Turkey.  Morocco and Ethiopia hold treasures to taste and learn about.   And so when I hear about, for instance, a new Thai restaurant opening in Bridgeport, I try it out of course. I am particularly interested in the places opened by recent immigrants, who are cooking for others in their own community, and not catering to an American palate.
Around here examples are the new Ruuthai’s Kitchen (Thai) on Beechwood Ave in Bridgeport, Pho Saigon (Vietnamese) in Bridgeport, Navaratna (Indian) in Stamford, Jolo’s Kitchen (Rastafarian) in New Rochelle, N.Y., and Hajime (Japanese) in Harrison, N.Y. which boasts a significant Japanese population.


So it should not be surprising that our vacations are always intensive food/restaurant hunts. We research the city to which we are headed and try to find really good vegetarian food. This was true of Oaxaca, Mexico; Montreal and Vancouver, Canada; Santa Fe, New Mexico; Istanbul, Turkey; Austin, Texas; and this year, Chicago, Illinois.
I had read Windy City by Scott Simon some years ago and was interested in the city’s ethnic neighborhoods.  We were told, “…don’t go in February”, but that’s when we close Bloodroot, and can travel.


Guide books provided me with a list of restaurants; the internet allowed me to peruse each one’s menu. And so choices were made.
We knew we wanted to go to Girl and The Goat Restaurant, 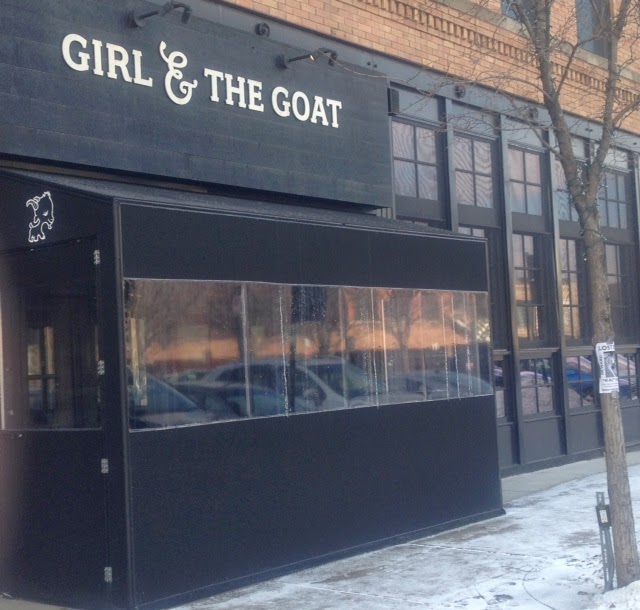 where we had a great waitress, Allison.  We enjoyed the Kohlrabi salad and had onion bread with tarragon butter and sweet pepper confit. We went to Rick Bayless’ Topolobampo and his Frontera Grill. There were many highly rated Mexican style restaurants in Chicago – who knew? One puzzled me: Bien Trucha is an hour’s drive out of the city to the town of Geneva.  Zagat gave Bien a 29 for food quality, a very high rating.  Was it worth going so far? Yes! The food was perfect; Appetizers were a row of small tacos filled with vegetables. A salad of arugula with jicama and candied pecans. Guacamole with pomegranate seeds, and a delicious corn cake soaked in syrup for dessert.


The Northeast corner of Chicago (Andersonville) boasts a superb Vietnamese restaurant, Tank Noodle, where the kitchen omitted the meats from their dishes for us without a problem or loss of flavor.

A simple stir-fry of chives, scallions and mung bean sprouts 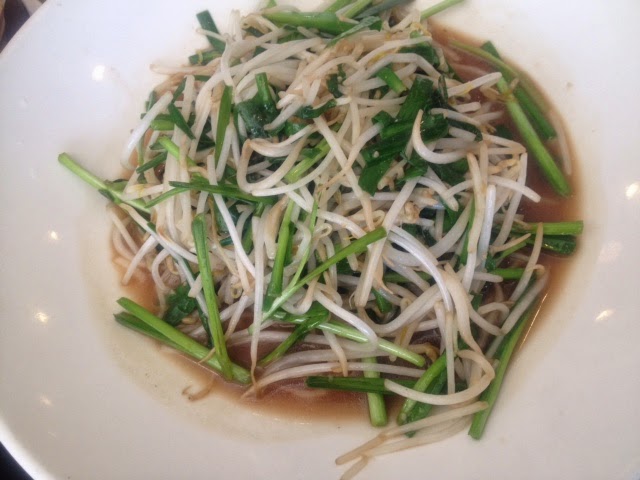 came in a delicious sauce, with sticky rice, and Banh Xeo crepes and summer rolls were better than those we tried in other Vietnamese restaurants here or elsewhere.  In another nearby neighborhood, we had lunch at an Ethiopian restaurant, Ras Dashen, where there were salads and other vegetable combinations besides the

pulse purees, on a beautiful 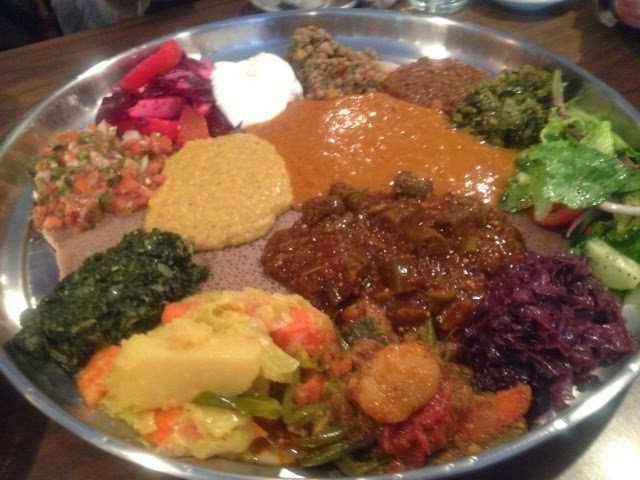 Injera platter. Like everywhere else in Chicago, we were pleased to be treated in such a friendly manner as we were at Ras Dashen and Tank Noodle.  Food at Naha, an elegant “New American” restaurant with Mediterranean roots pleased us with appetizers of a wild mushroom pureed soup, and handmade pasta Strozzapreti.

Our terrific waiter Tiago, at Topolobampo told us to go to Lula Café in Logan Square, in the northwest corner of the city, and indeed the food was up to his praise. We had a wonderful granola, a farro casserole, and a spinach salad. 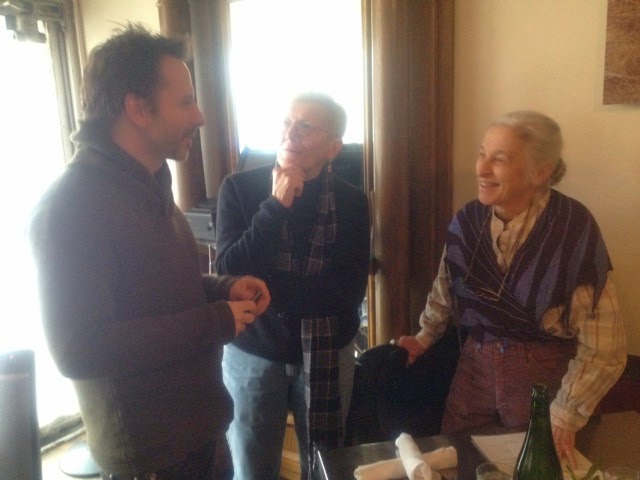 and Rodrigo Cano from Bien Trucha, both with no formal culinary training, but who each had their own vision of what good food should taste like, and were able to implement this vision.
It was impressive how much our waitress, Allison, at Girl and The Goat, admired Stephanie Izard, the owner/chef. And how much the staff at Topo/Frontera appreciated Rick Bayless, who takes a group of 24 of them to Mexico each year.  I took a tour of the Topolobampo kitchen with Andy, the head chef, who made it clear that sharing know-how is important to them. Rick Bayless is constantly stretching to explore origins of Mexican food and to interpret it to match American ingredient availability.
Taxim served upscale Greek food, delicious, but too crowded and noisy for our comfort.
It took a lot of searching to find a Polish restaurant for pierogi. The Polish community seems to have left the city. Still, the pierogi and potato pancakes we found at Podhalanka were very good. 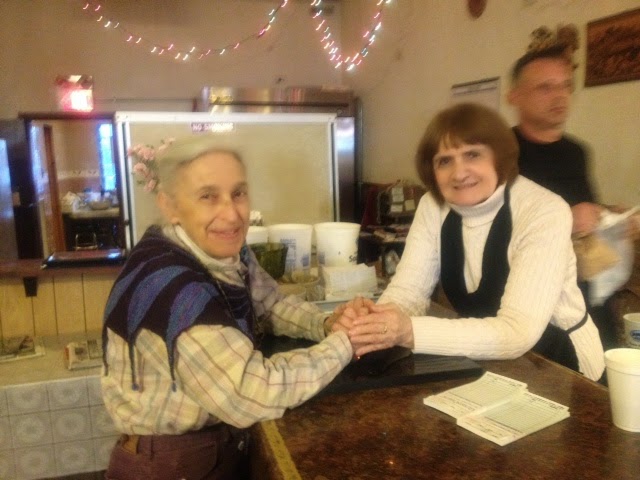 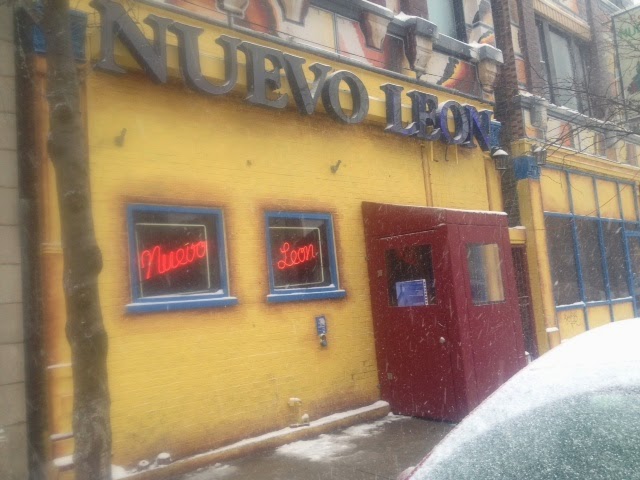 Nuovo Leon on our street. (We were disappointed with the coffee served elsewhere.)
On Sunday, we had a lovely brunch at Nightwood, in our Pilsen neighborhood. Another “new American” restaurant owned by Jason Hammel, the owner of Lula Café.  A lovely comfortable space with an open kitchen.
We were surprised at the condition of the streets. City officials don’t seem to believe in plowing after snowstorms and the number of potholes would rival those of a third world country.
But the skyline! 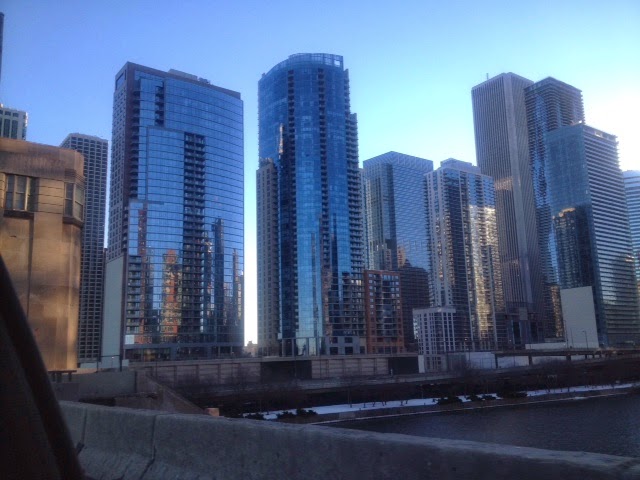 I never imagined skyscrapers could be so exciting and beautiful. I have always loved going to NYC and coming off the Cross Bronx expressway onto the Westside Highway, to see the Jersey side Palisades. But after traveling along Lakeshore Drive by Lake Michigan, our homecoming trip to NYC paled in comparison!


And the museums. Truly wonderful museums. The Art Institute of Chicago, Field Museum and Shedd Aquarium are all situated near each other on the edge of the lake.  All are beautifully designed and impressive in their politics.  At the Art Institute, I surprised myself by becoming tearful when seeing an original of 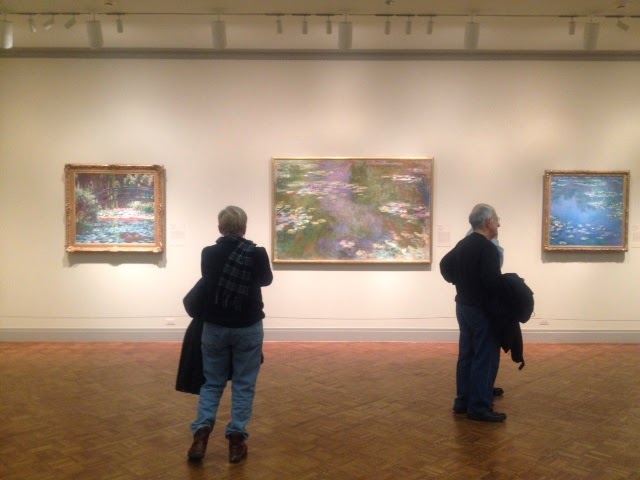 
Respect was demanded for peoples’ cultural differences at the Field Museum; 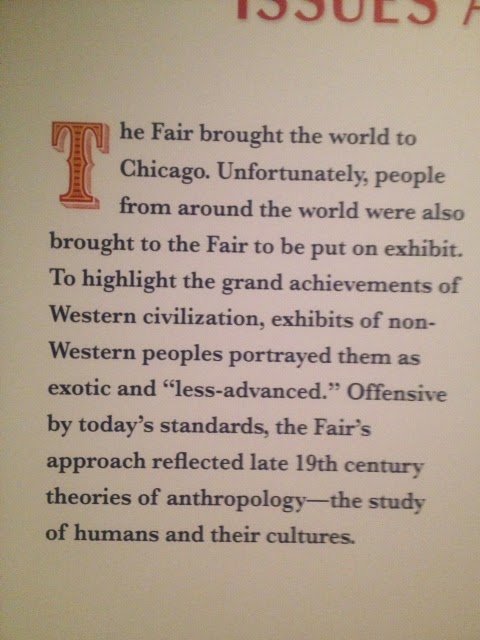 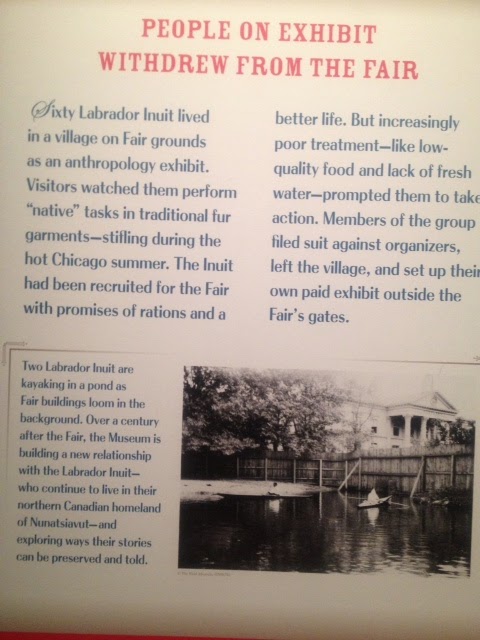 at the Shedd Aquarium…..it was for us to save ecosystems by eating less meat. 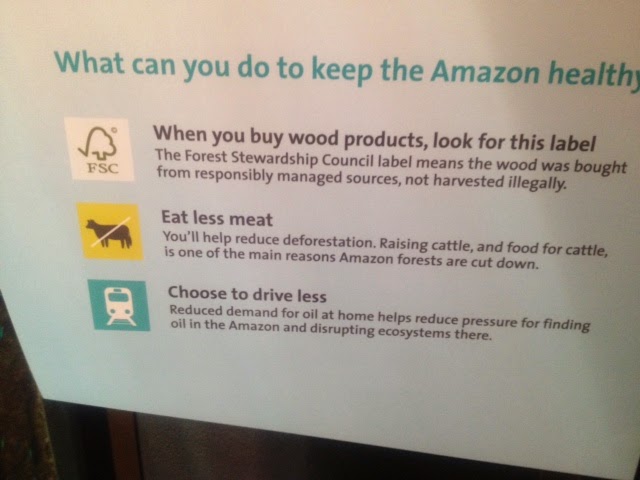 In our Pilsen neighborhood, the Mexican Museum was smaller, but also well done. 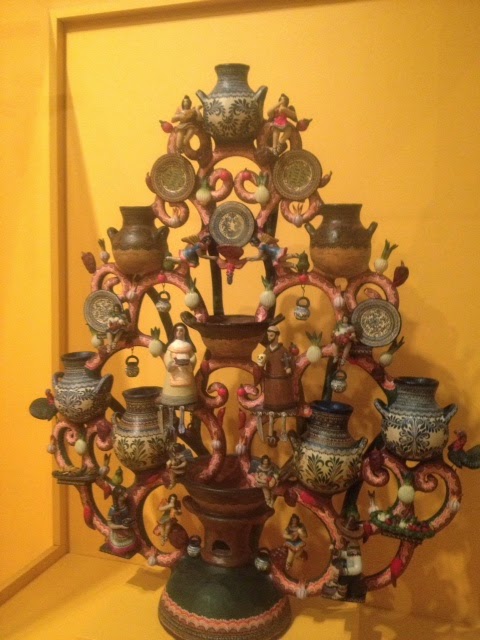 Other pleasant surprises – Andersonville, with Tweet for breakfast, a craft galleria, a Swedish bakery, a feminist bookstore: Women and Children First whose owners are retiring, However, there is much interest in purchasing it so it will surely continue.


On Logan Square, where Lula Café is, City Lit 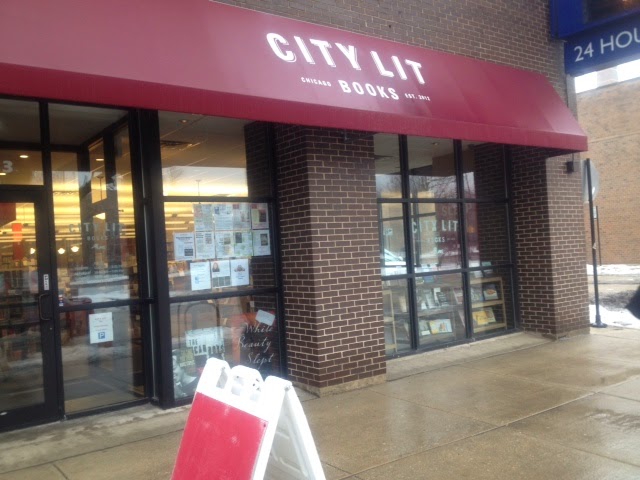 is another woman owned bookstore which benefits from the weekend lines outside Lula. They are now carrying our cookbooks.


My daughter, Sabrina, asked what I learned that I could bring back to Bloodroot. When I reflected on this I realized that the most exciting ideas were inspired by the most unpretentious restaurants. The Polish restaurant that served us pierogi used a filling of mashed potato, dried porcini bits and sauerkraut. The too-noisy, too-crowded Greek restaurant used the most delicious olive oil we had ever tasted – from single olive variety, Koroneiki. (We found some here at Steve’s Market in Norwalk.) One of our least favorite restaurants, Urban Belly offered a squeeze bottle, which contained a combination of thick soy sauce and balsamic vinegar. Delicious! Unfortunately, the food needed a lot of help and there was very little choice for vegetarians


I’d love to be able to duplicate Frontera Grill’s banana leaf tamales, served with rajas. And we would dearly like to find (or make) better tortillas. We will see what other inspiration makes itself known from our experience in vibrant Chicago.

I am always delighted when a diner at Bloodroot tries a new dish which is not in our cookbooks, and would like to make it at home. Sometimes it is printed in one of our calendars, and I fetch that copy from the kitchen for them to photograph.


I consider it an honor for someone to want to reproduce what we are doing.  Of course I want them to!  Perhaps they will figure out some new seasoning or procedure and come back and tell me. Sometimes they bring one of their own treasured recipes---it is a win-win situation.  At Bloodroot, our purpose is to serve the very best vegetarian food, but that's impossible.  I can update a recipe and make it better, but surely someone else, or one of us can make it better again. There is never best! There can always be improvement, and isn't that wonderful?


So you can imagine how I feel about restaurants, particularly vegetarian or health restaurants, refusing to share their secrets. What a poverty of spirit, to think that once a recipe is known, it will be a disaster.  Like what? The customer will open her own place and take away all this restaurant's diners? Or will she no longer patronize the stingy restaurant since she can reproduce her favorite dish at home? How ridiculous!  And how sad.


It has always seemed to me that the essence of what we do is to further the making of life (and dining) better for us all. Sharing information is how to do it. This is particularly true for new vegans, or even for folks like me, who have made vegan desserts and entrees for 37 years and am now vastly broadening my horizons with recipes for vegan cheese and creams, that one of my customers, Florrie, introduced to me. I want everyone else to know how to do this, if they want to.


Usually I can figure out what is in most dishes, but sometimes I can't and I ask.
The better restaurant chefs tell me. Sometimes I troll the internet, and sometimes I think, why bother.  Keep your secrets, I prefer to share mine.
Posted by selma miriam at 2:57 PM 5 comments: